The recent Cult Pens Mechanical Pencil Day Giveaway was won by 'Dash Lambda'. Here is his review of the pencil that he chose as his prize.

Hello! I’m not great at introductions, so here’s the gist: I’m the guy that won the Cult Pens giveaway, and here’s a review of what I got, thanks to Cult Pens:

It’s a LAMY 2000 pencil, .5mm flavor. It comes in a rather serious-looking box, probably the fanciest packaging I’ve ever dug a pencil out of. The 800 just came in a triangular tube, and the Nero’s box was big and stylized but still just a normal cardboard box. Ultimately packaging is just packaging, but they certainly did put some effort into it.

Picking the pencil up, the first thing I noticed was the weight. I like heavy pencils, and while this is probably relatively heavy, that’s not really what we feel: We feel density. Like that demonstration a lot of you probably had in some science class where you hold a 1” ball bearing and a ball probably twice the diameter of a baseball and try to say which one is heavier; it’s a trick question, they weigh the same. This thing is not the ball bearing. But, after using it a while, I find it’s dense enough.
The second thing I noticed was the rattle. Exactly the same as the Nero’s rattle, the lead reservoir is held at the clutch end and there’s enough of a gap at the eraser end for the button to move slightly. Also like the Nero, this can be eliminated by wrapping packing tape around the metal tube on the button cap.

The clutch end is held quite securely, so no problems there. The tip is not retractable, but it’s short and conical so it doesn’t really pose a problem.

I feel that pictures are a bit deceptive about this thing’s size (not that the perspective in the one above does anything to help the matter). It’s actually shorter than an extended 800, about the same length as the Nero. It’s fatter than them all, though really not as fat as it looks.
Before getting on to build quality, this has to happen to everything I own:

Notice how the body separates about ¾” up from the steel end, rather than at the steel end. This may seem like an odd choice, but in my experience plastic-on-plastic threading lasts considerably longer than metal-on-plastic. Maybe I’m wrong, but to me this says an engineer somewhere at LAMY decided to sacrifice cost for longevity, and I applaud that.

Speaking of cost vs longevity, look at that lead reservoir. And that clutch housing. As far as I can tell, the only plastic parts on this pencil are the body and button knob. That ring on the clutch housing is rubber, it appears to be a cushion for the mechanism. This pencil is very well engineered and manufactured, it doesn’t creak or bend and it all fits together perfectly. A testament to the build quality is the fact that if you weren’t familiar with the L2K family, you probably thought it separated at the metal, because the seam is almost invisible… Except for here, at least. In my pictures it’s more visible than it is in person. Odd. 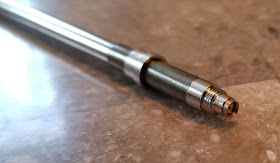 As for the mechanism, I like it. There’s a lot of travel with a rather definite knock point, not as clicky as a P205, but not as mushy as an 800. It spits out 8mm of lead for ten clicks, I found two clicks to get you what you need to write. Not as precise as a lot of drafting pencils, but this isn’t a drafting pencil.

The clip is awesome. This thing isn’t gonna bend like a Rotring’s, it easily slides over thick pockets, and it holds on securely. It has a very slight side-to-side play, but that’s hardly even noticeable.
I’m not sure why you would want to, but you can indeed take the clip off just fine.

If you’ll be taking the clip off and putting it back on regularly, you’ll notice a ring start to develop on the body where the clip touches it. It would do that even if it were metal.
You can see a brass flap in the mounting point for the clip; that’s the wear point where the clip’s spring lands. That flap is actually part of a brass tube lining the whole end piece, accompanied by a brass ring on the mating end of the body:

That one took me a bit to figure out, but it’s another structural wear point. The lip on the clip pushes against the inside of that brass ring, and that can amount to a lot of force. LAMY went through this thing carefully addressing every wear point they could find.
As for balance…

I appreciate evenly balanced pencils, but after getting the Nero I found an equal appreciation for bottom-heaviness. The balance, the material, the size, the weight, the shape, everything about this pencil is just comfortable. I’ve never found Rotrings uncomfortable, but they still feel like heavy chunks of brass whose existence doesn’t depend on this meager reality. The L2K feels like a finely crafted instrument that recognizes you’re a human, with squishy human hands.

So what’s bad about it? Well, a couple things.

First of all, the conical tip isn’t as blunt as one might expect for a non-retractable pencil. You’re certainly not going to bend it or poke holes in things, but it’s a tiny bit sharp in that edge-of-a-soda-can way, and likes to grab onto fabric if you’re trying to push it into a crumpled pocket or something. The Nero had that problem too (the sleeve pokes out just a tiny bit when retracted), but because the mechanism of that pencil relies on the sleeve touching the paper it smoothed out quickly.

The worst part, though, is the eraser. I’m one of those freaks that actually uses the integrated eraser, in fact I use it more often than my block eraser. With the Nero I was disappointed that the cap was so tight that putting it back on meant clicking out lead, but even then the eraser itself was fine. This thing? This thing is pathetic. The cap is just as tight as the Nero, it erases like a super-ball, the length of a new eraser is such that you’re in danger of breaking it when you use it, and the first time I took the cap off I didn’t even know it had an eraser because it stayed in the cap. Every time I take the cap off I have to push the eraser back down, it’s just not secure.

Anyway… One surprising thing was the lead it came with. Stock lead is really hit-or-miss. Rotrings come with Tikky lead (which is by most accounts the smoothest lead on the market), Pentels I think usually come with Hi-Poly, and everything else is a lottery. But one thing you can be certain of is that they all come with HB. Yeah. This thing comes with 3B. Maybe a soft 2B. I don’t normally like soft leads, but I also usually use drafting pencils; it actually feels right for this one. International shipping wasn’t kind to it, though; every single stick had about 1cm broken off the end. Either way, that’s another thing that someone actually thought about, they didn’t just throw in the same thing everyone else does.

I think this is a great pencil. I actually think I’ll start carrying this one in my pocket and my Rotring in my bag, because I’ve had to re-bend the Rotring’s clip a few times now and it’s already not touching the barrel again. This clip won’t do that; it just won’t. Small details like the full metal lead reservoir and mid-body separation say LAMY wasn’t pinching pennies when they built it, and that certainly shows. The eraser is a travesty, but I do also carry a Boxy anyway.

In the story I shared for the giveaway, I said I didn’t have much of a collection because I hated not using tools. The three I had before this have specific purposes: A Rotring 800 I know from experience I can take through hell and back, a Nero for when my handwriting gets microscopic (I’m a math major, it’s a problem), and a P205 for lending. Now I have the pencil that can live clipped to my pocket without regular clip-maintenance, and I enjoy using it.

I partly chose the L2K to test the waters before getting the fountain pen. When a company takes a well-loved pen or pencil and expands it into a series the results aren’t always up to the standard of the original; for example, the 800 ballpoint is nice, but a couple parts from the function-over-form pencil are left in as vestigial decorations to make it look like the pencil, a couple little details are just missing, and you can just tell it’s not the 800. The L2K does not give me that feeling. It feels like LAMY put honest and practical thought into making a good pencil. I’m still a little disappointed it doesn’t retain the cap, but at the same time that’s one of the differences between a fountain pen and a pencil: A pencil doesn’t need a cap. And unlike the Kaweco Sport, the cap isn’t an integral part of the design. Kaweco…

So to me this feels like a product from a company that understands not only how to make a good tool, but also what is and isn’t important when making a family of products. It’s a good sign for the rest of their lineup.

Thanks Dashy. That's a very detailed review. Also of course, thanks again to Cult Pens for the giveaway and their Mechanical Pencil Day.
My Lamy 2000 has been, and still is, my everyday pencil used in the office at work, and was one of the earlier mechanical pencils that I reviewed on this blog. Here's some links to older Lamy 2000 content on this blog. From many, many years ago...
My 2000 review
2000 and Scribble
Kiwi-d at 7:23 am
Share