Last year I was contacted by a reader, Mark from California, who suggested I might be interested in trying his favourite eraser, the Sanford Tuff Stuff Eraser Stick, and he offered to send me a couple as “they only cost peanuts”. Well I am interested in finding the ultimate eraser, so I accepted his offer and duly received a package in the post. So, thanks Mark. 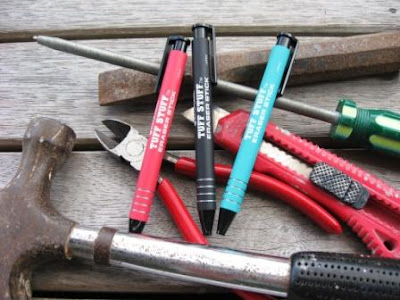 Well first off the Tuff Stuff seems a fairly typical mechanical stick eraser. Just like many a mechanical pencil, you push the top to advance the lead, oops, sorry, the eraser core, and you can push the core back inside the tip if necessary. I think this eraser stick counts as “pocket-safe”. The pocket clip top section pulls off to allow refilling with another eraser core. I’m not completely convinced by the security of the top section to the main body and I could imagine it coming loose after much use, but then this is not an expensive item , so just get another one if that ever happens.

The Tuff Stuff comes in a rather nice selection of colours, and the concentric rings on the grip section look nice, and add some security to the grip for large erasing jobs. The body has a slightly unusual feel, almost a hint of rubber, a hint of sponginess – I actually quite like it. 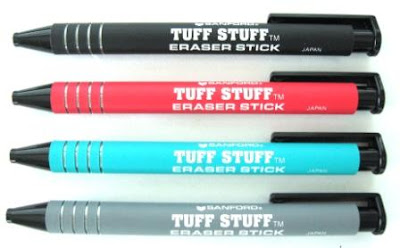 Now, the main event, the eraser core. Well it’s fairly narrow for a stick eraser, just under 4mm diameter (a bit over 1/8 inch). Mark pointed out to me that this diameter fits several mechanical pencil eraser cartridges (e.g. Faber-Castell). The compound appears to be a fairly hard vinyl, but don’t take the “vinyl” bit as gospel. I have noticed a bit of a general trend for eraser compounds to get harder as their diameter decreases, which does have some logic to it. Being a fairly narrow diameter the Tuff Stuff is well suited to smaller more precise erasing jobs, e.g. rubbing out an individual letter as opposed to whole lines of wording. The waste doesn’t readily twist up into strands so it’s a little messy, particularly on larger jobs. The eraser core often ends up with a dirty half-rubbed off stringy-blobby bit stuck on its tip (yes, that’s a technical term), which rather irritates me. (Dreadlocks for erasers?) 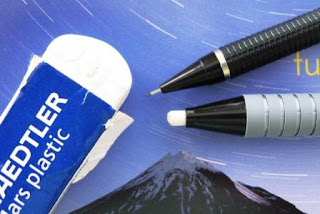 In a quick comparison test with the test bench Staedtler Mars Plastic eraser, the Mars did a better job of erasing ordinary woodcase pencil HB lead and mechanical pencil 0.5mm HB lead from ordinary photocopy type paper. Tuff Stuff did a reasonable job, it’s just Mars was better. The difference was slightly more evident with woodcase pencil lead. In the photo below you can see there is some graphite residue left behind on the Tuff Stuff erasings (left half of page), and how the eraser waste is scattered around compared to the two twisted up strands of eraser waste on the Mars (right hand) side of the test page. 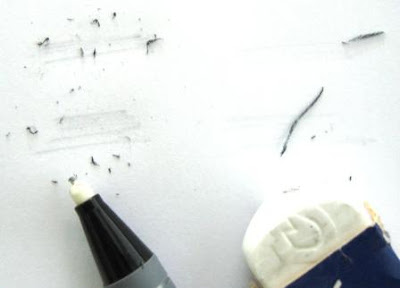 Overall then, I do like this eraser, but to date, Mars Plastic plus an eraser shield remains virtually unbeatable.

Footnote - I have started to become suspicious that larger erasers like the Mars plastic are better at erasing hard pressed pencil lines that are indented into the paper. Paper is rather flexible and I half suspect the extra pressure from a bigger eraser pulling and stretching at the paper (compared to a narrow eraser) allows for better graphite removal. Something to check out one day in the future. Any thoughts? 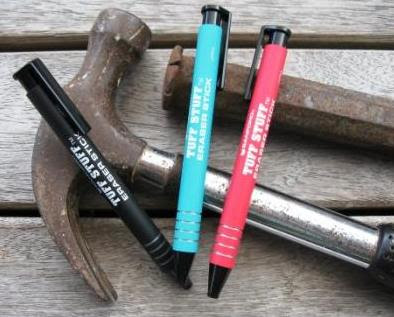